In the wake of Mad Cow’s Robbie Miller Half WOD 9 Pax gathered to do something Completely Stupid and Utterly Pointless. YHC believes that we may have accomplished that goal.

Preblast via Slack on 4/22/19: If you are participating in the CSAUP, posting for the Saturday morning workout at JBZ, with your ruck, is mandatory. @MAD COW will provide details. Ruck distance is 12.0 miles required completion time is 3.5 hours or less

Required Packing List
1. A Rucksack or Backpack
2. 20lbs minimum specific added weight (this is exclusive of pack weight and items listed below)
3. 2 Liters of Water minimum (Bladder or Bottle)

Optional Packing List
1. Drybag or zip lock bags for phones, keys, wallet, etc.
2. Snacks/Gels if you think you will need them (consider that you will be posting for the workout and then rucking)
3. Gloves
4. Hat
5. Phone/GPS Watch/Apple Watch/etc. – PLAN AHEAD, IT MAY GET WET

Required Team Gear – YOU MUST ARRANGE FOR THIS GEAR TO BE THERE
1. One American Shovel Flag
2. One F3 Shovel Flag
3. 100ft of paracord
4. A knife

AO – The West Side

YHC Advised the PAX that their mission would consist of three phases – Resupply, Infiltration, and Extraction. Pack weight had been set at 20lbs min, with 2 liters of water required per Pax. Group gear consisted of all the items listed above in the Preblast. YHC verified the that all group gear was accounted for, and then advised the Pax that the following penalties were in effect:

While not disclosed to the Pax at this time, the AO an mission phases are given in the map below

Not knowing how far they had to go, YHC instructed the Pax to collect the two 35lbs sand bags and the one 70lbs duffel bag, as well as the two shovel flags, and start moving. A 50 minutes time target was given with an unknown distance, pacing was monitored and encouraged by YHC. The Pax completed a loop around the north side of the John Ball Zoo, south to the Mine’s Golf Course, and east to the Kent Country Trails office where the sand bags were dropped off. Pax rotated through carrying all of the various items. 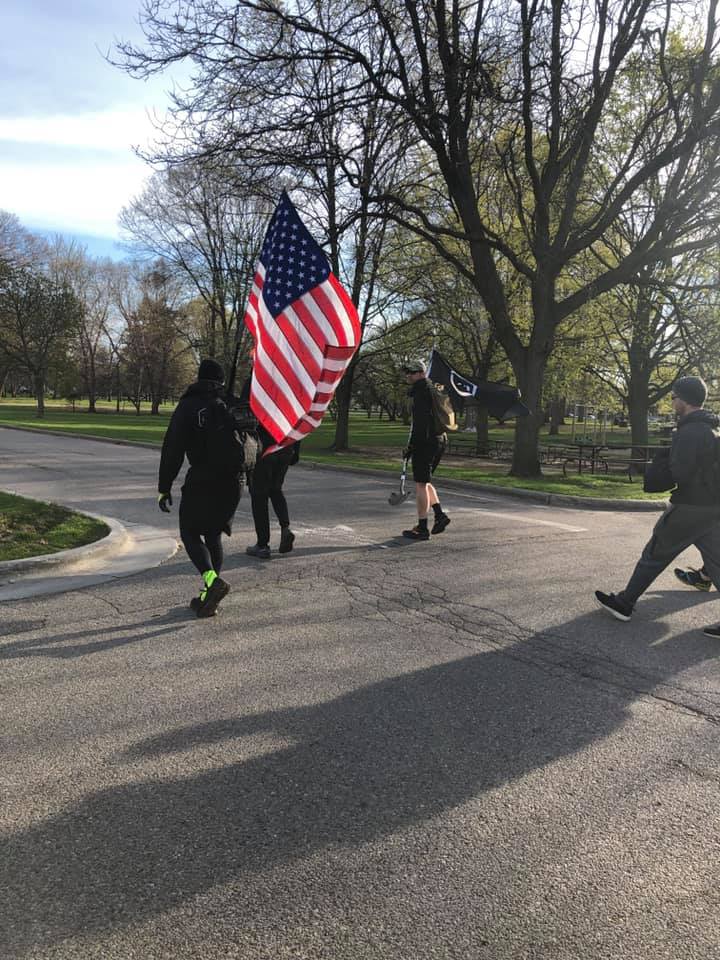 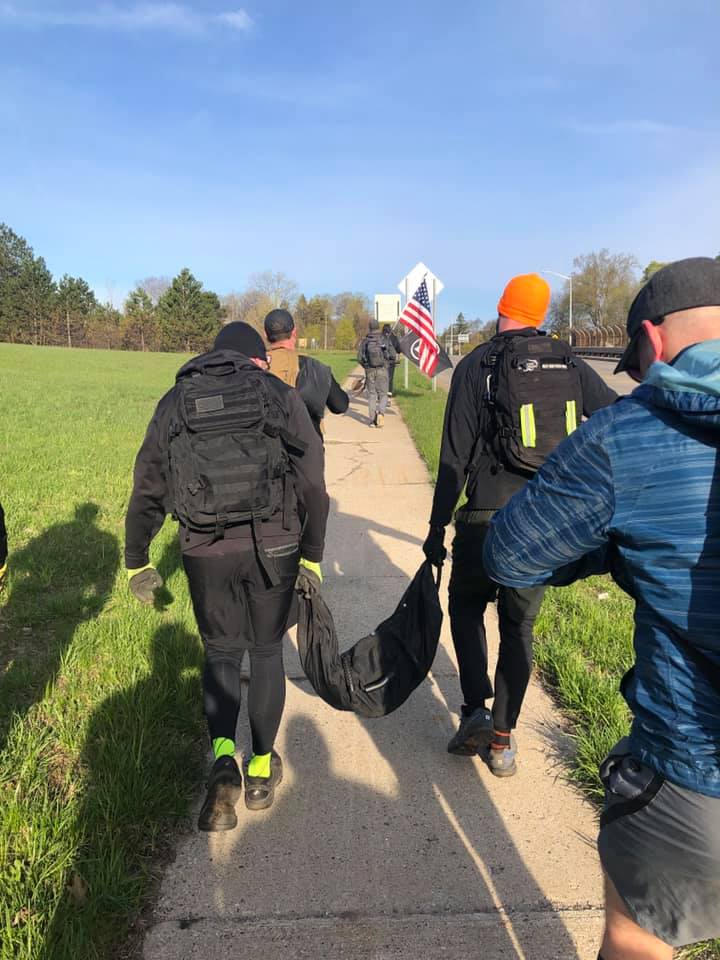 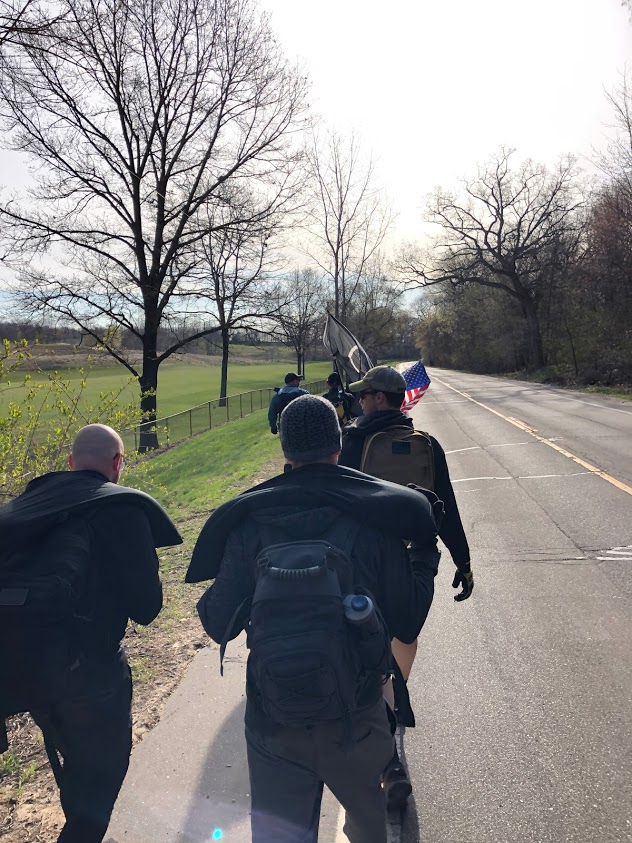 At this point the Pax entered the infiltration portion of the mission, with 4 miles to go until the next way point. However, they quickly learned that things to not always go as planned – 0.75 miles into the infiltration phase, they were informed that the team had suffered a casualty (not in real life) and they needed to construct a stretcher from supplies available to them, and evacuate the casualty to a meeting point one mile away. After some discussion, the Pax constructed a hammock style stretcher using paracord and logs found along the trail. YHC informed them that everyone must ride in the stretcher at some point. It was fairly slow going as we worked to move the “injured” Pax the required distance, but the team successfully completed the challenge even after the the stretcher broke at one point. (the runners along the path were quite intrigued by what was going on). 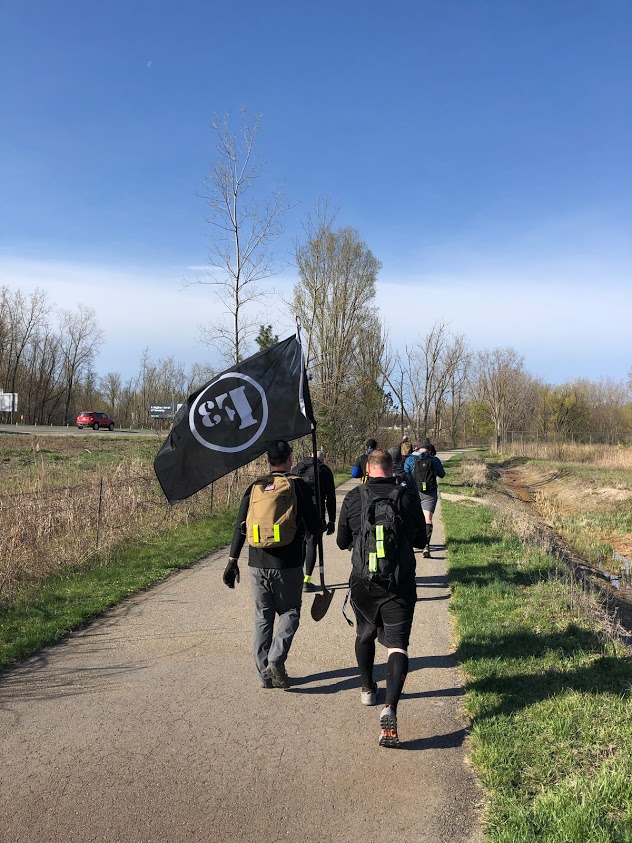 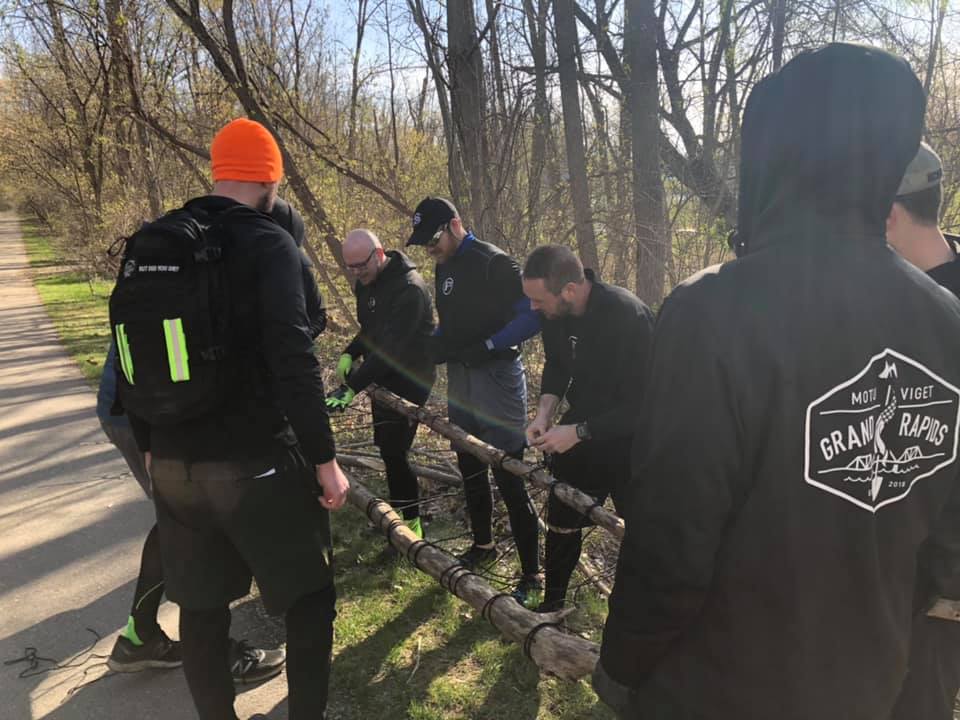 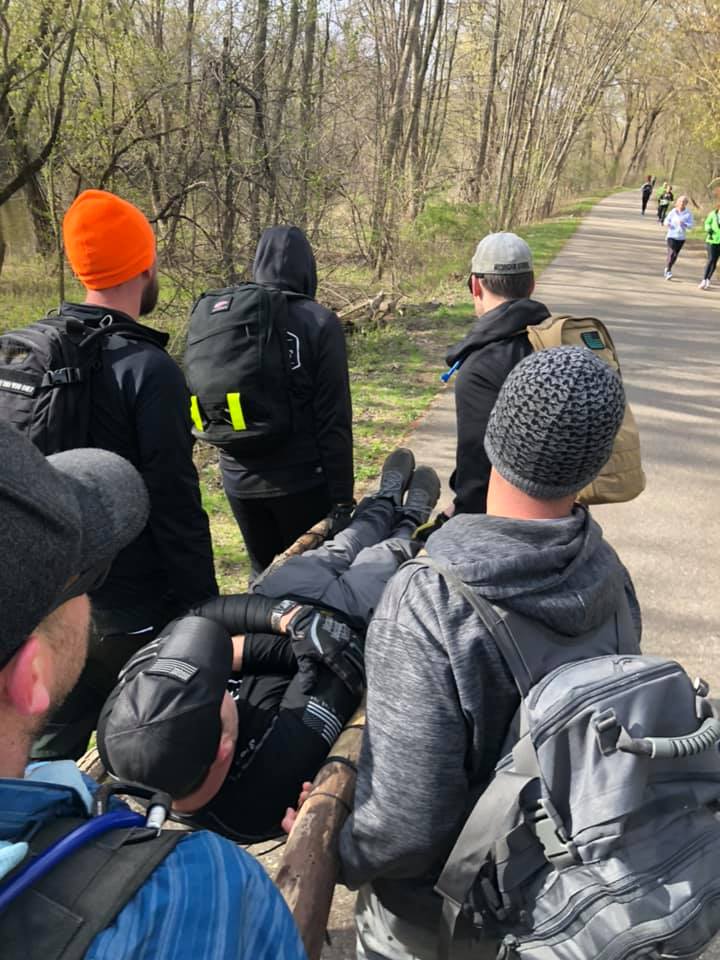 After successfully completing the CASEVAC phase, the Infil was continued. The Pax covered 1.8 miles to the SW corner of Millennium park, where they were advised that if they had electronics they didn’t want to get wet, now was the time to pack them up. The team was given 1 minute to pack their gear before YHC lead them down into a small stream in the woods. The Pax followed the winding and frigid stream over and under fallen trees for 1/8-1/4 of a mile, with flags in hand, before we reached the exit point. Much mumblechatter was heard by YHC about this portion of the ruck. I shrugged it off, knowing that it was only going to get worse.

After a brief (0.15 mile) walk, YHC informed the Pax that we were going back in to the stream, to move under a bridge that crossed it. Mad Cow boldly exclaimed “Do you know how close that is to the water? There’s no room to go under” To which YHC responded “Yep!” and then promptly got in the river and bear crawled under the bridge. All the Pax followed. 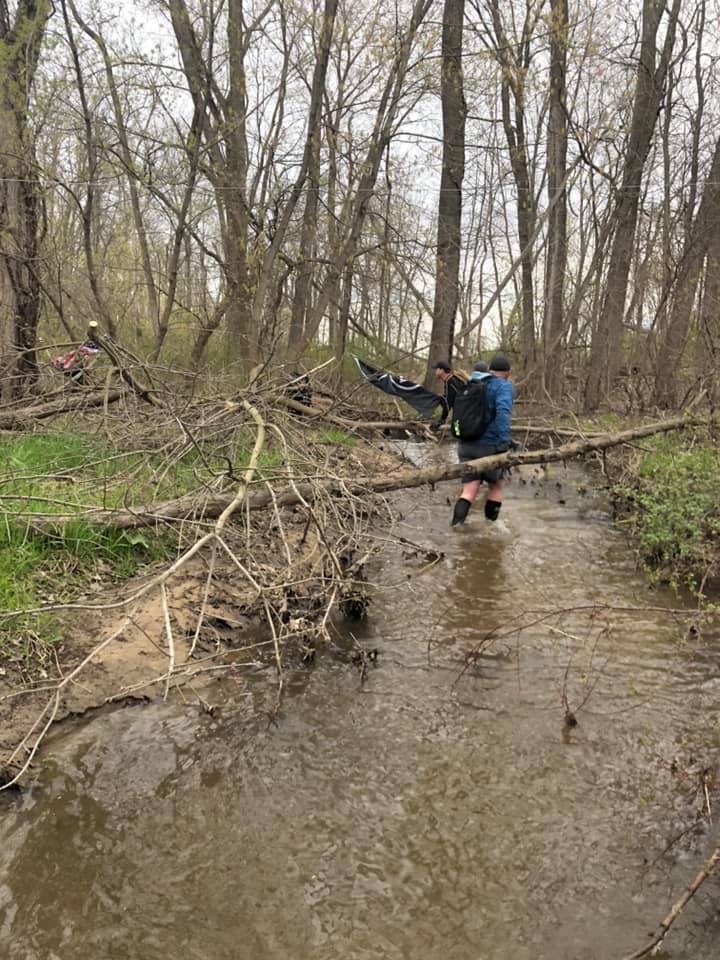 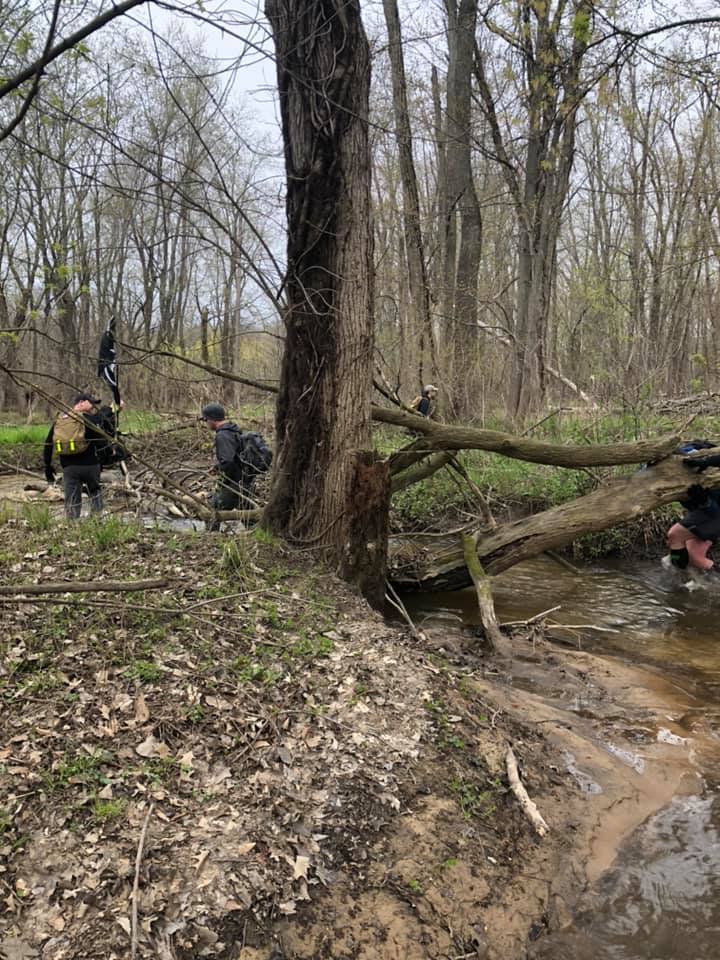 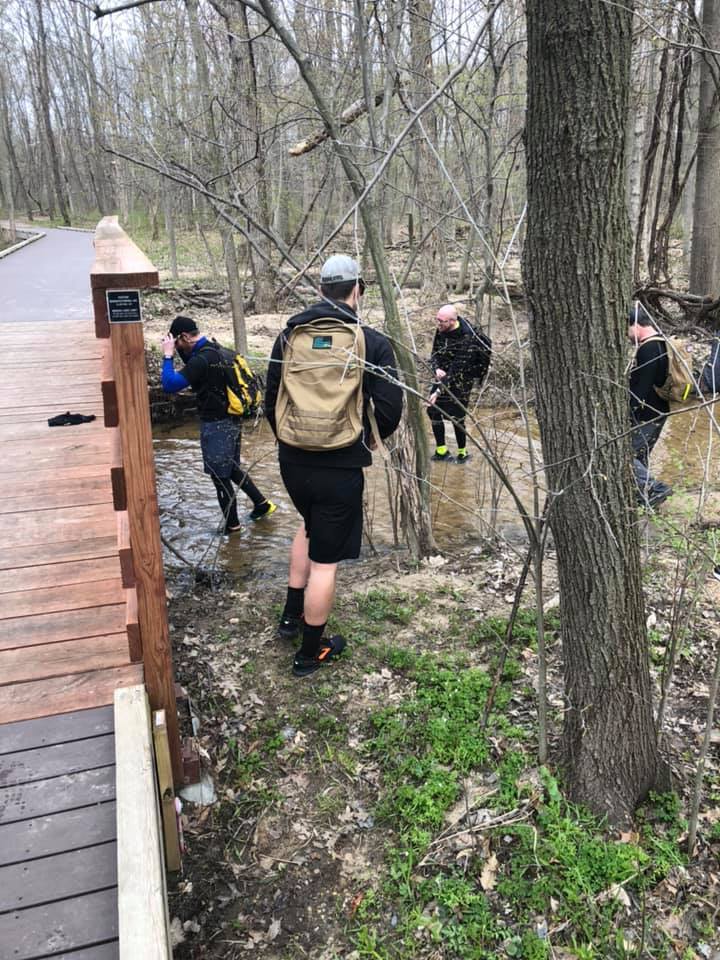 Exiting the water again, we moved 0.5 miles north until we arrived at the asset recovery phase. An asset by the name of Pole Polesteen had to be picked up and moved. YHC had originally intended on carrying it back to the AO, but it proved to be much heavier than I thought. The Pax were instructed to carry Pole up and over a pedestrian bridge in the park (shovel flags in hand). Pole Polesteen proved to be a considerable burden, but we were able to complete the task. Right before dropping off Pole, 5 overhead presses were completed with Pole. 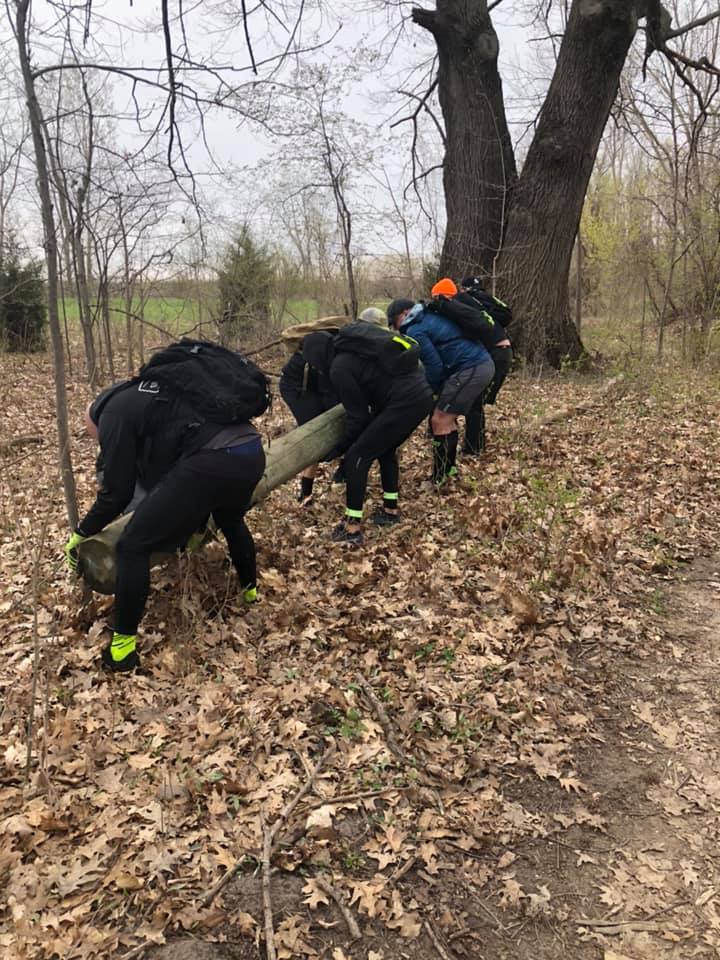 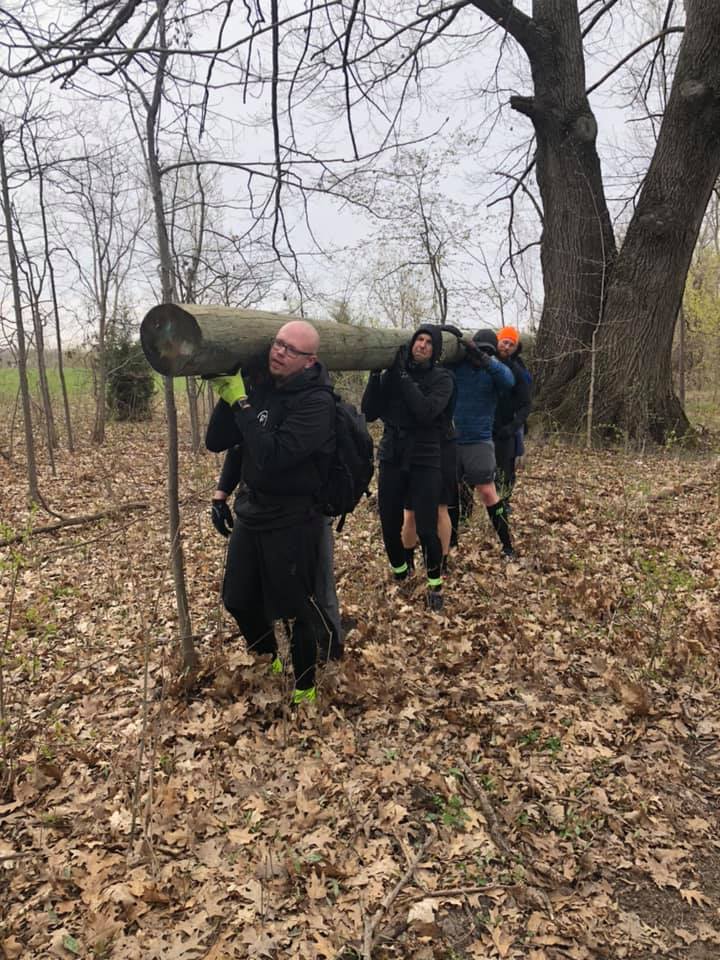 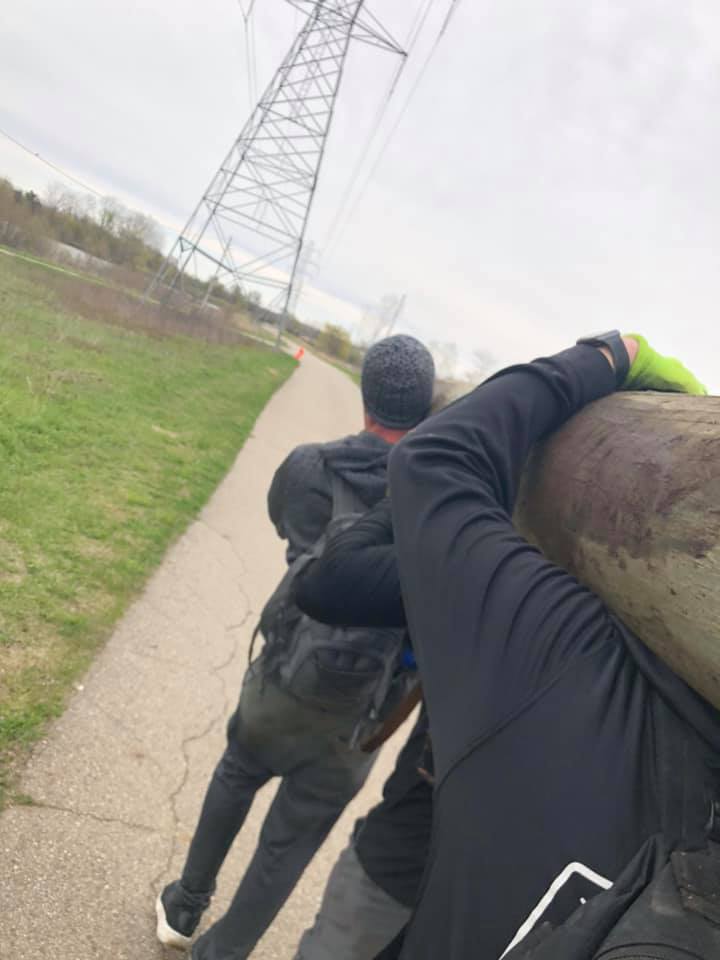 At this point YHC advised the team that we were now in the Exfil stage of the mission, and it was a ~4.5 mile ruck back to the AO. With much mumblechatter, we continued back along the winding paths and trails to the AO. The pace had slowed noticeably, and some Pax were feeling the burden of the long day, and wet clothing. As we reached the resupply drop off point from the first phase, YHC advised the Pax that they had one more task to complete, which was to return the sand bags to the AO. As we crossed Butterworth, everyone seemed to be moving well and looking forward to finishing, so YHC decided we needed one last beat down, and instructions were given to go up the hidden hill on the back of JBZ. The mumblechatter turned to grumblechatter after this order was given, but all of the Pax pushed on until we were up the hill, down the stairs, and back at the AO. The CSAUP had been finished successfully.

There was much rejoicing:

Reflections – F3 GR needs to upgrade it’s shovel flag game. The top is broken and it almost touched the ground way too many times.

6 Pax went to Kraut’s to crush some burgers and beers afterwards.